Grace is messy. If I could sum up the latest book by Preston Sprinkle in three words that is what I would say. Preston Sprinkle is the director of Eternity Bible College’s extension site in Boise, Idaho. Preston made his impact on the evangelical world a few years ago when he co-authored a book with Francis Chan titled Erasing Hell. 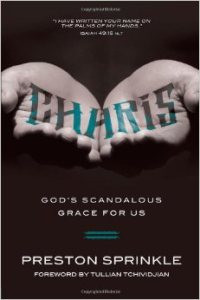 The question that came to mind before I began reading Charis is one that many of us wrestle with. Do we really need another book on grace? Christian bookstores have become so inundated with books on this topic that many of them have their own grace section in the book store.

Preston admits his own struggles to that question, and his book titled Charis: God’s Scandalous Grace For Us is the answer. The original Greek word for grace is charis (with a hard “ch” like karis) which simply means ‘gift’. The book begins unfolding the premise of charis and the many misconceptions that come with trying to define exactly what grace is. The term has become a buzzword in Christian circles, and the power of transforming grace seems to be missing all together.

Each chapter of the book takes us through a vivid and sometimes shocking picture of grace in the Old Testament. Preston takes our glamorized picture of the Old Testament heroes and shows us the reality of their own struggles and how God chose to use them despite their many flaws, failures, and laundry list of sins.

Preston uses very coarse language at times, and this is really my only issue with the book itself. While what he says is true, he seems to push the boundaries of language for the sake of the shock factor itself. Some of the title chapters reflect his intentions to shock the reader, and at one point in the book, he admits himself that he shares some pretty harsh word pictures to drive the point home. Of course conservative Christians are likely not his target audience, but they will certainly benefit from the theology behind each chapter. Preston is speaking directly to the person who has been rejected, shamed, hurt, and burned out by religion in itself. There were certainly a few times I would read something wishing that he would have worded things a little differently, but it was also a reminder of the grace I am to extend to others.

The book drives home the truth that throughout the Scriptures it is clearly evident that God uses sinful, broken, and rebellious people to accomplish His will.

The last chapter of the book should address any concerns of the skeptic, who will likely accuse Sprinkle of using grace as a license to sin. Preston shares his theological underpinnings in the Epilogue titled ‘Where Does Obedience fit in’?   Preston agrees with the Apostle Paul who says in Romans Chapter 6:1-2 “Should we continue in sin that grace may abound? By no means!”

I would recommend Charis to anyone who wants to understand grace in a deeper, yet more practical way, who isn’t going to be offended by gritty language (though not vulgar). I appreciate how Preston humanizes the Old Testament Saints in such a way that gives us all hope that God can and will use us despite our flaws. If you are interested in how to reach broken people in a dark world, you will benefit from this book.

This review has been published and shared through Netgalley.